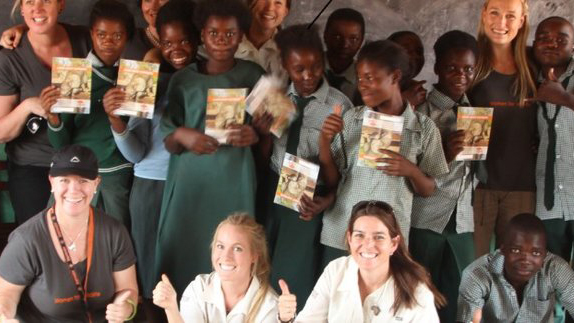 The Ripple Effect of Paying It Forward

When we set off on our all-female Elephant Ignite Expedition (EIE) in 2016, we had no idea what kind of ripple effect we might be setting in motion. Our mission was to travel 15,000km through 10 Southern African countries to point the global spotlight on the plight of Africa’s gentle giants, which involved raising funds to support organisations dedicated to the preservation of elephants, assisting with community upliftment and youth conservation education.

It was during a session of youth conservation education at Mugurameno Primary School in Zambia (with the Conservation Lower Zambezi (CLZ) organisation) that an opportunity presented itself to not only change the plight of African elephants, but also change a life. We were meeting with 12 of their students, who all belonged to the school’s Environmental Eco-Club.

We spent some time talking with the children, educating them about environmental issues, and that’s when we met Gloria. She was so attentive and constantly had her hand in the air to answer any question we asked. Gloria’s eagerness to learn really made an impact on one of our EIE crew members, Nikki Williamson, who wanted to try and help further Gloria’s education.

When Nikki returned from the expedition, she contacted CLZ in her own capacity to see if she could sponsor Gloria’s schooling as a bursary, wanting to have a positive impact on Gloria’s life, and future. Nikki has been paying out of her own pocket for Gloria to go to school for the past year now – a wonderful ripple effect from the Elephant Ignite Expedition.

Nikki had just three conditions for the bursary:

Unfortunately, Gloria didn’t meet the first two conditions but Nikki is hopeful that she will improve with time to make the most of this opportunity. Nikki is planning on paying for the next year’s school fees as well, to set Gloria up properly and hopefully, inspire others to do the same.

Gloria has just turned 15 years old and has changed schools (15 girls in her other school are pregnant) to attend Chitende Secondary School in Chiawa Village. Nikki was thrilled to receive a letter and copies of two of Gloria’s school projects recently, both of which were conservation focused: “How can we, in the community, protect elephants?” and “A tree planting project at Chitende Secondary School”.

It cost R10,000 for Nikki to sponsor Gloria as a new student, covering a new uniform and holiday course. The cost goes down the following year to ± R7,000–R8,000 per year. Basically, R660 per month is what it costs to give someone the opportunity of a better education and a better life. In Nikki’s words:

“I just need to know that maybe one good deed inspires another, and that others catch on and pay it forward.”

Nikki’s generosity has helped to change Gloria’s life. In this world, there is no shortage of opportunities to change a life. Your act of kindness can create a positive ripple effect beyond what you might be able to see. So if you feel like paying it forward today, why not sponsor the education of a child? If you’re not sure how to go about it, we can help.

Well, you gotta follow that dream wherever that dr

Congratulations all involved. Reposted from @flyi

How we like our Monday morning coffee! ☕⁠ ⁠

Reposted from @singita_ If ever there was a photog

Just a girl, sitting on a @frontrunnerza roof rack

Reposted from @sportforlives Conservation is centr

Life is meant for good friends, and great adventur