Rate: US$ 5800pp sharing (US$600 non-refundable deposit required to book a seat)

Africa. The one place on Earth where you’re guaranteed to fall in love with raw, magnetic natural beauty. It is an intoxicating mix of sights and sounds, wildlife and natural splendour that enthrals, captivates and will literally take your breath away. Trekking Giants is a 1800km adventure spanning three of Africa’s alluring countries, Botswana, South Africa and Mozambique, in search of the Big 5.

Our expedition begins at the Tuli Block, a hidden gem in the easternmost corner of Botswana. This unique, timeless corner of Africa with spectacular wildlife has been described as Botswana’s best kept secret. From Tuli, we cross into South Africa making our way to the Soutpansberg mountains in the Limpopo Province to explore the country’s highest biodiversity of flora and fauna. Brace yourself for unrivalled scenery, unspoilt nature, and a rich variety of wildlife and endemic species. This is a magical place of abundance and beauty; a place where you will also discover and connect with yourself. Thereafter, we venture into northern Kruger National Park to see untamed Africa from a new perspective. We will spend a full day walking through the remotest corners of the Kruger, giving you the chance to stumble upon the Big Five (lion, leopard, rhino, elephant and Cape buffalo) in their untouched habitat.

Our fundraising eco-adventure wraps up in Mozambique where we will be the support team to a group of experts who will be collaring elephants in Banhine National Park. Be prepared for some long bumpy African roads, amazing wildlife and breath-taking scenery. The route takes us through far-flung, traditional villages and national parks with incredible game viewing. Travelling with only five vehicles, our group will be led by one of Africa’s most experienced adventurers and humanitarians, Carla Geyser and her Blue Sky Expeditions crew, who will provide daily briefings on the regions visited and routes and roads to be undertaken.

Some of the extraordinary experiences you can look forward to as part of this group of eco-travellers includes: 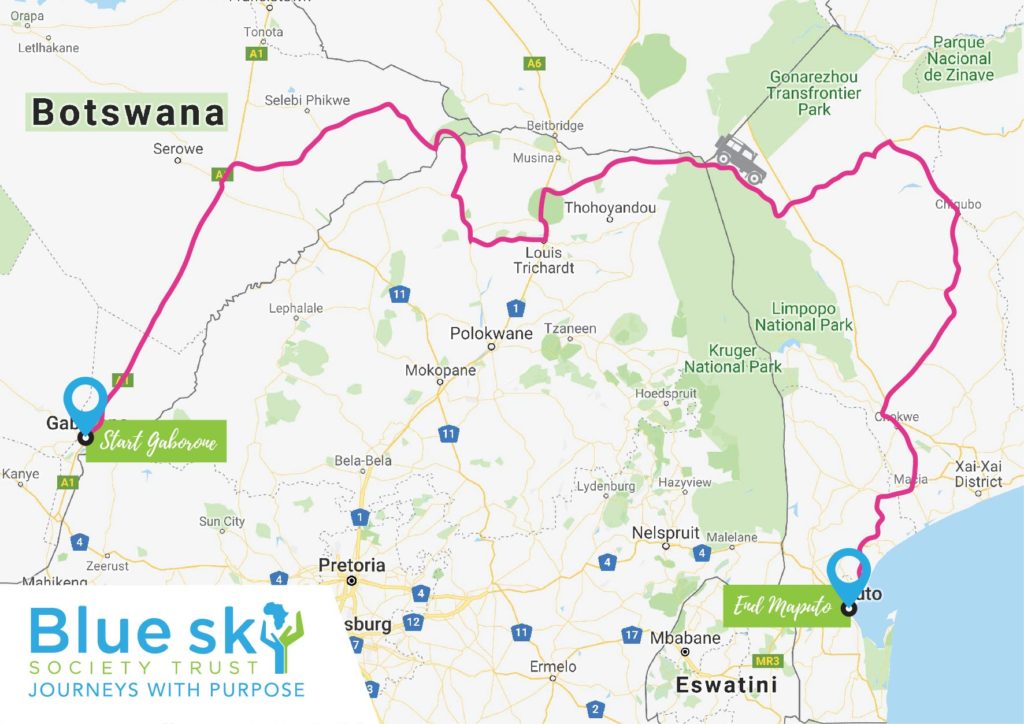 Have a question, enquire below!

*Please note this itinerary may change slightly but the expedition leader will keep you posted and updated. Terms and conditions apply due to availability.

Welcome to Botswana! Your adventure begins when you are greeted at the hotel at 8am. It’s adrenaline from the word go, as we drive out to our first destination. A quick brekkie, then we hit the road towards Tuli Game Reserve. This will be our home for the next four nights. Kgakala Trails Camp is a small and private rustic bush camp, comprised of dome tents, communal outdoor bathrooms and a main lapa area. The camp is situated on the banks of the Mohave River. The name Kgakala means ‘remote’ or ‘isolated’ in Setswana and that is exactly the feeling you will have in this charmingly wild and rustic camp.

The unfenced Kgalakala Trails Camp offers accommodation in six basic dome tents, each sleeping up to two persons on camp stretchers. There is no electricity, so lighting is provided for by gas, paraffin and solar. Shower water is heated by a donkey boiler, and the cookers and a freezer are gas-operated. Game such as Elephants, Lion, Leopard, Brown and Spotted Hyaena, Civet, Genet and African Wild Cat may possibly be seen in and around the camp. The Mohave River is a hotspot for game movements and the remoteness of the camp ensures that you will truly feel that you are deep in the wilderness.

Tuli Wilderness is home to a diverse range of wildlife and the Tuli Area boasts the world’s largest elephant population on privately-owned land (over 1800 elephants) – offering some incredible sightings and providing fantastic photographic opportunities. Our private and exclusive 24 000 acre unfenced concession borders the great Limpopo River at its southern end and the Motloutse River to the East. It encompasses riverine thickets, mopane veld, open plains and boulder-strewn sandstone ecosystems, complete with the game you would expect. The landscapes are breath-taking! We will take part in activities such as Game Drives, Bush walks and will also be doing community work and visiting a school in the area to do wildlife conservation education.

Today we drive across the Pont Drift border into South Africa to the Soutpansberg mountains in the Limpopo. Province. This is Mother Nature in her no-filter glory! Be prepared to be amazed.

Kruger National Park, in north eastern South Africa, is one of Africa’s largest game reserves. Its high density of wild animals includes the Big 5: lions, leopards, rhinos, elephants and buffalos. Hundreds of other mammals make their home here, as do diverse bird species such as vultures, eagles and storks. Mountains, bush plains and tropical forests are all part of the landscape. We will spend two nights in Pafuri which is in the far north of the park, and has some of the highest biodiversity and diverse scenery and landscape including Lanner Gorge, Crook’s Corner, the Fever Tree. We will spend a full day walking and exploring looking for Africa’s Big 5

Leaving Kruger, we head for Pafuri Border post and enter into Mozambique via Limpopo National Park, driving through thick sand and across the dry Limpopo river bed.

Today we head for Banhine National Park where we will be based for four nights. The 700 000 ha Banhine National Park is situated in central southern Mozambique, midway between Pafuri in the west and Vilanculos in the east. The Park features extensive plains and flood areas, which form crystal clear lagoons that is an important passage point for migratory birds that flock there in en mass during the rainy season.

Banhine is a critically important component of the Great Limpopo Transfrontier Conservation Area as it lies within the wildlife corridor between the Zinave and Limpopo National Parks. Peace Parks has started the rehabilitation and restoration project has stared with Peace Parks.

Banhine National Park was established in 1973 to conserve the giraffe and ostrich populations found there. Unfortunately, these, as well as other wildlife populations, were nearly eradicated during the war and commercial poaching activities. In July 2018, Peace Parks Foundation and Mozambique’s National Administration for Conservation Areas (ANAC) formalised their long-standing alliance in developing Banhine National Park with the signing of a formal partnership agreement. We will be working with Saving the Survivors, Wildlifevets SA and Elephants Alive on this elephant collaring operation.  The animals (and vets) safety is ALWAYS a priority so we will work under their guidance. The terrain is very wild and there may be a chance that only the vets and pilots get to the elephants but we will do everything in our power to be included as much as possible.

A long day’s drive leaving the park heading to Maputo, where we will spend our last night together before flying out in the morning.

Breakfast and then transfer to airport.

You are among friends when you are with us. Together, we are in a safe space and you have the freedom to be yourself and to explore. Whether you have never left your home country or are a seasoned solo traveller, this trip is guaranteed to offer you adventure, friends, and breathless beauty.

*Please note this itinerary may change slightly but the expedition leader will keep you posted and updated. Terms and conditions apply due to availability.

These self-drive adventures are organised and led by Carla Geyser, the founder of the Blue Sky Society Trust (BSST) and Blue Sky Expeditions who has, to date, led many successful trips into Africa. If you are an enthusiastic adventurer who is passionate about conservation and takes life as it comes, then this is for you! #JWP brings together like-minded people from around the world on trips that focus on visiting and raising funds for wildlife initiatives along the route.

#JWP EXPEDITIONS ARE NOT FOR EVERYONE

Carla handpicks the expedition members, always looking for well-rounded individuals of various skills and interests. If you are an enthusiastic adventurer who is passionate about conservation and who takes life as it comes, then our next #JWP expedition could be for you.

These expeditions often involve driving long distances over bumpy dusty roads, camping in remote areas, at times being without mobile phone service for days, and of course loads of giving back through hands-on charity work.

This is not a tour but rather a team expedition, and every member of the team is expected to pitch in with cooking, cleaning, camp set-up etc. It is the experience of a lifetime, and we would love to have exploratory fun-filled compassionate spirits along for the ride.

ARE YOU UP FOR THE CHALLENGE?

This is a LIMITED entry journey, which means only a few people get to experience this unforgettable never-to-be-repeated experience. Minimum enrollment for this trip is 6 people. If minimum enrollment is not met 90 days prior to departure date, the trip may be cancelled in which case full payment including the deposit will be refunded.  (Minus the non-refundable deposit of US$600).

Safety is always a priority. We have a satellite phone, SATIB Insurance 24-hour medivac and assistance on call, and access to doctors 24/7.

Unless you are purchasing the airline insurance, it is a good idea to wait until departure is confirmed to buy plane tickets.

Please book your DEPARTURE from Maputo on the 26 July 2020

Traveling before or after the program is totally fine – just let Blue Sky Expeditions know your plans.

Please ensure that your passport is valid for at least six months from the date of entry and that you have at least two blank pages in your passport (the back page does not count).

The colourful currency in Botswana is the Botswana Pula, South Africa is the Rand and the Mozambican Metical is the currency of Mozambique.  Credit cards are not widely accepted so please don’t rely on this as your main form of payment. Reliable ATM’s in banks are available in cities (Gaborone, Kruger). You may also bring cash to exchange at banks and exchange offices.

TIPPING: There will some situations where you may feel the need to tip but as always it is up to your discretion. Typically, it is customary to tip our local guides $5-$10 per day per guide.

We do love our soul 2 sole project. Thank you to a

We are back at Empilweni primary school with Arame

"It is invaluable to maximise the opportunity to c

Who Loves Africa's Elephants? 🐘🐘🐘 Have r

Comments from Dr Michelle Henley on the study on I

In 2016, the Elephant Ignite Expedition’s all fe

This is one of the many reasons we LOVE working wi

We truly can learn from nature.... #Repost @kaksha

Any cookies that may not be particularly necessary for the website to function and is used specifically to collect user personal data via analytics, ads, other embedded contents are termed as non-necessary cookies. It is mandatory to procure user consent prior to running these cookies on your website.

To book fill in the form below