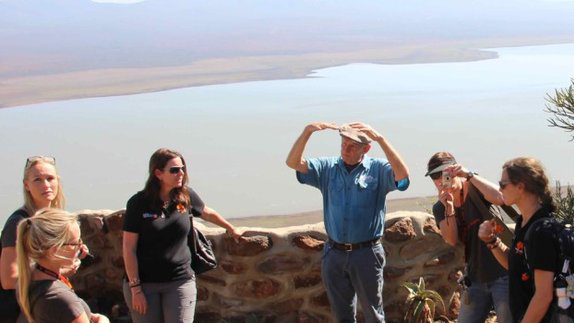 From Pongola to Tembe in the Spirit of Great Hearts

This article is part of a series of journal entries from the Elephant Ignite Expedition, 2016.

DAY 3: The frost was thick the next morning when we set off with Heike Zietzer, who monitors the elephants, to try to find them, but sadly they were hiding on that very chilly morning and nowhere to be seen. Time wasn’t on our side and we had to keep moving, so we headed back to South Africa to go and visit the research facility called the ‘Loose Mongoose Research Museum’ situated in Pongola Game Reserve.

Heike told us a bit about the history of the elephants in the area; how some had sadly met with their deaths due to the railway line running through the park (15 elephants in fact). It was quite emotional hearing their stories and then seeing their big white skulls displayed there. The Pongola elephants were brought from Kruger National Park in 1997 as orphans whose parents had been culled.

Penny at the Loose Mongoose Tembe Elephant Park Lunch The Pongola elephants We were invited by Heike to name five of the new babies, which was SUCH an honour, but quite a task and we had to stick to certain rules. After some serious thought, we finally came up with the following… Asterix’s son we called “Hercules”, who is a celebrated hero and is also a northern constellation. Hercules is the fifth largest of the modern constellations.

Buhle’s son we named “Isibindi”, which means Courage. Astro’s son we called “Vega” (a star in the constellation of Lyra). Vega is the fifth brightest star visible from Earth. Aquarius’ son was named “Phoenix”, which is a constellation in the southern hemisphere. It got its name after the mythical firebird, the Phoenix, which represents fire and strength. The young juvenile female whose mother was not yet known was called “Bhekhithemba”, which means ‘look for hope’.

Heike joined the Pongola elephants in 2009 to monitor the bulls after their vasectomies. There are around 80 Pongola elephants to date. There are 52 in the A&B family, 20 orphans, and 10 vasectomy bulls. Sadly, as the land the elephants roam gets smaller, conservationists have to come up with ways to control their breeding.

Digs Pascoe Carla Geyser Mavela Campsite Jozini Dam Elephant Ignite expedition crew Tembe Elephant Park: home of Africa’s largest elephants Later, we headed towards Mavela Community Camp for a scrumptious lunch of putu and stew. The campsite has the most spectacular view overlooking Lake Jozini. After a site inspection, Bruce and Digs handed each EIE crew member a beaded angel “Ngolozi” to look over us and keep us safe on our journey. It seemed apt that the sign overlooking the dam read: “In the Spirit of Great Hearts!”

We arrived at Tembe Elephant Park two hours later, just in time for an afternoon game drive. Tembe Elephant Park is a 300 square kilometre reserve between Zululand and Mozambique, and home to Africa’s largest elephants as well as the smallest antelope, the Suni. Tembe was established in 1983 to protect elephants who used to migrate between Maputaland and southern Mozambique on the ancient legendary Ivory Route.

Some of the great tuskers still tramp their ancient pathways through dense sand-forest and tall yellow grass. Tom Mahamba, the camp manager, said some beautiful words which really resonated with u: “Guests are like rain and sunshine; they give a balance in life because where there is rain and sunshine, there is good living.”

Tembe is the second place in Africa where the biggest tuskers have emerged. The first is Tsavo in Kenya. Tembe actually has the strongest gene pool of ivory in Africa. We also met with Ernest Roberts, who manages the park, and Catherine Hannekom, who is studying the elephants of Tembe.

It’s no secret that my happy place is being out

We went on a little adventure and we had a secret

In a world where everything can often be so seriou

Are you ready for an epic adventure? Join us as we

Beacuase we love humans with big hearts and @drago

There is not a more formidable force, than a woman

“The purpose of life, after all, is to live it,

Are you thinking about joining our expeditions in