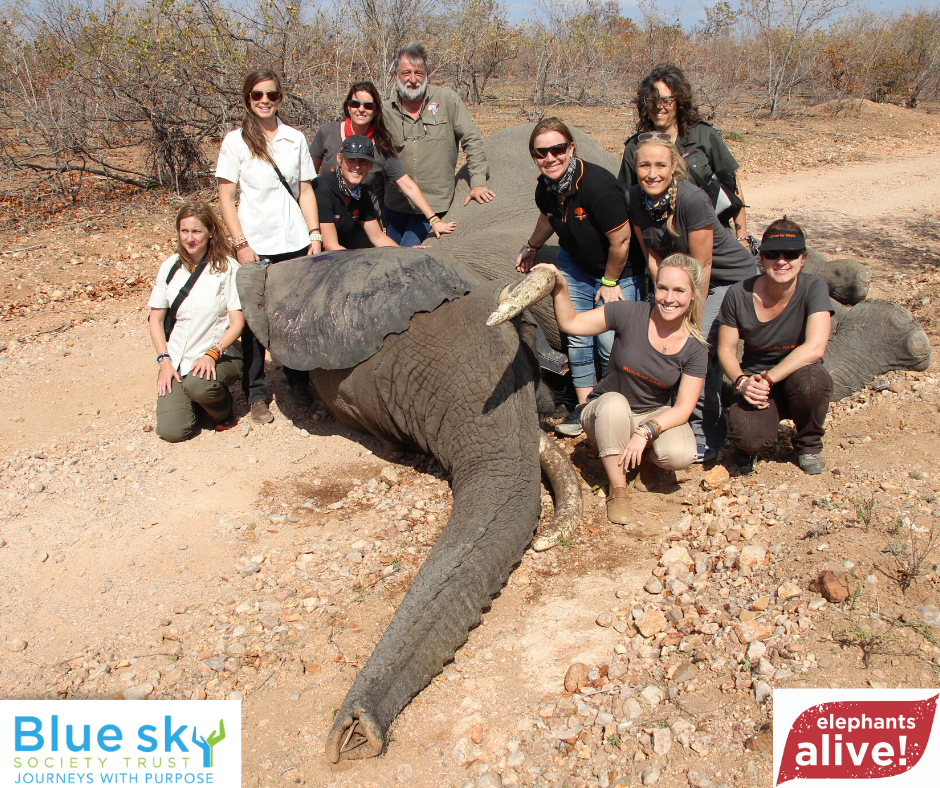 During the first week of their journey, they visited Elephants Alive in APNR where Dr Michelle Henley gave them valuable insight into EA’s monitoring and research work during a hands-on elephant collaring operation. Two elephant bulls and one cow were collared as part of an ongoing study to determine how minerals in the soil, water and plants influence elephant movement with one of the aims also being the application of this data to support efforts to mitigate human-elephant conflict. The study forms part of a larger, ongoing research project in the area of the Phalaborwa Copper Mine where interestingly, a number of the elephants have been visiting regularly. The collar for the elephant cow was funded by the expedition and she was subsequently named “Ignite”, much to the delight of the crew. So began a journey of keeping a protective eye on Ignite’s movements…

Fast forward 4 years, and Carla has expanded on the sustainable travel concept, successfully leading expeditions into Africa under the banner Journey’s with Purpose. #JWP brings together like-minded people from around the world on trips that focus on visiting and raising funds for wildlife initiatives along the route. To date the #JWP expeditions have travelled to Namibia, Zambia, Zimbabwe, Botswana, Mozambique and Zambia. At least four expeditions are on the 2020 travel calendar.

To kick off Blue Sky Expeditions year, and their fundraising drive, a small team will re-visit Elephants Alive in a joint collaring operation in March. Ignite’s collar is nearing the end of it’s four-year lifespan and the original Elephant Ignite team together with individuals from some of Carla’s later Journey’s with Purpose Expeditions are rallying to support the collaring operation aptly named “Re-igniting Ignite”.

Commenting on the upcoming trip Carla said: “Going back to –re-collar Ignite makes me feel like a proud parent and getting back together with some of the original expedition team is equally as exciting as we formed a very special, sisterly bond while travelling in 2016.”

“In a world filled with so much doom and gloom, it’s so nice to be able to focus on something good for a change. Mama Africa is a special place and elephants embody everything that is good about Africa and family. The way the matriarch leads her herd with great strength and confidence is inspiring. They are empathetic, compassionate and supportive creatures who even grieve for their dead and rally to protect each other, something we, as humans, could learn from. The bond between sisters, mothers and calves is magnificent to watch.”

Elephants Alive aim to collar three elephants on the day and the #JWP team is fundraising to sponsor two collars  (Thanks to the support of Tanglewood Foundation ) and the associated veterinary costs. (Collaring three animals on one day is more cost effective in terms of helicopter rental and professional fees.) A given-gain campaign has been set up and the crew hope the public will share and donate, even if it is just a small amount. As with all #JWP trips, travel costs are for the crews account and no donation funds are used in this regard.

Comments from Dr Michelle Henley on the study on Ignite and the other elephants residing in the area:

We are getting very interesting results from the elephants occupying the mine. Some of those collared in the APNR also move across towards the mine and, as I predicted when we first initiated this study, are being driven by phosphorus deficiencies amongst other micro-nutrients driving their movements.

The key aspects being covered by the ongoing PhD (Fiona Sach is the PhD candidate collaborating with the British Geological Society, the University of Nottingham and a number of African based partners in KNP as well as Elephants Alive in the APNR) study include:

Click on https://www.givengain.com/ap/carla-geyser-raising-funds-for-blue-sky-society-trust/ to help us make a difference.

It’s no secret that my happy place is being out

We went on a little adventure and we had a secret

In a world where everything can often be so seriou

Are you ready for an epic adventure? Join us as we

Beacuase we love humans with big hearts and @drago

There is not a more formidable force, than a woman

“The purpose of life, after all, is to live it,

Are you thinking about joining our expeditions in