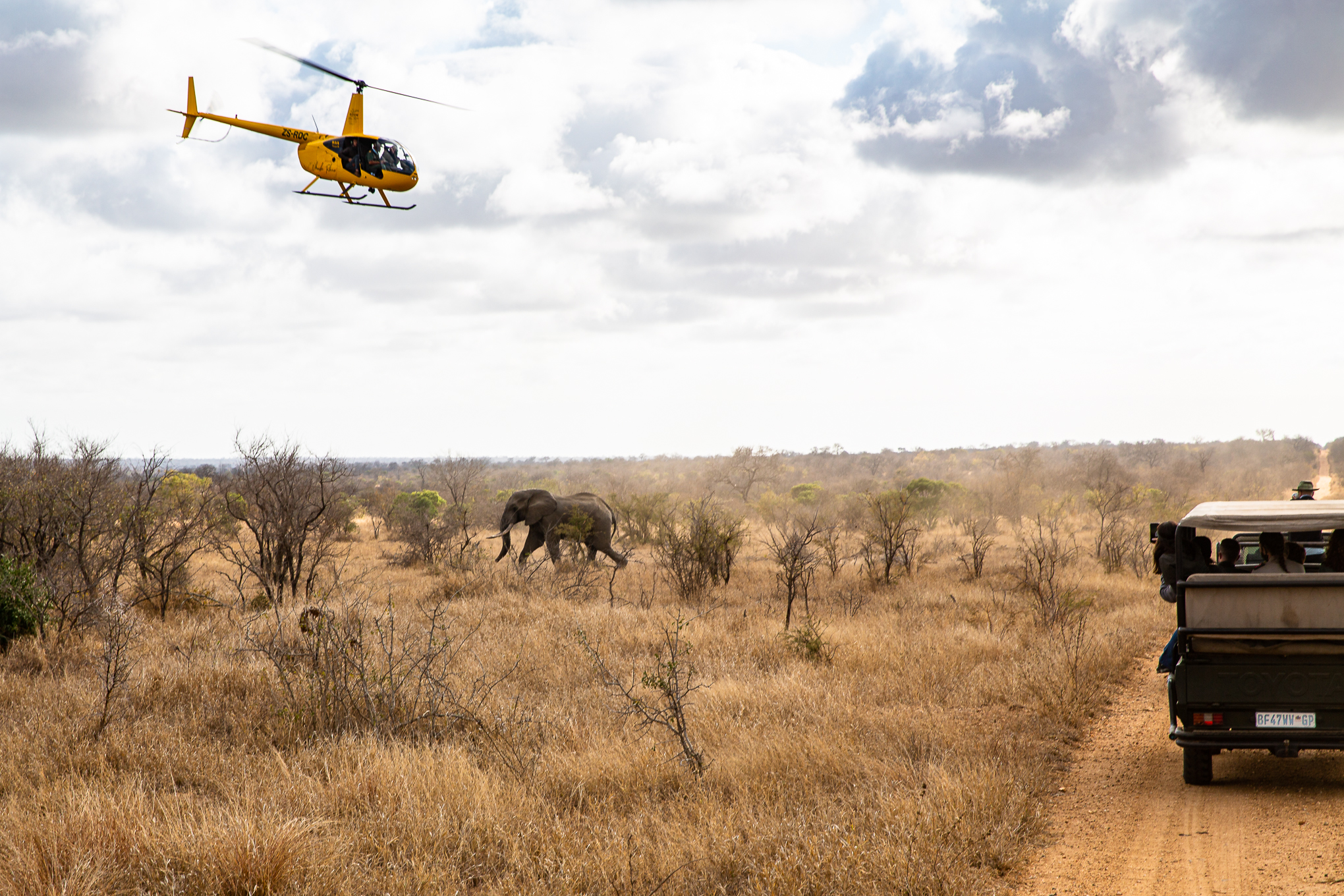 Collaring elephants from your laptop or TV

There is something incredibly special and unique about standing next to a 6-ton pachyderm who is snoring away merrily on the ground. A majestic animal who has graced our planet for millions of years. The path finders, the grey ghosts of Africa, the original communicators. An animal so physically powerful yet so vulnerable because of us, humans.

Elephants have always been one of my passions – they seem to embody everything that is good about Africa and family. Elephants are wise old souls and they are deeply intelligent. They are full of compassion and empathy, and they are not shy to show their emotions. Elephants are sentient beings; they are caring and emotionally tuned-in to their surroundings.

But, despite how you and I perceive these magnificent creatures, elephants are facing formidable odds. Their populations are being decimated by poachers who kill for their tusks, and by local communities who live alongside them. You see, elephants are opportunistic; when they find something they like, be it an orange or mango tree or a cornfield, they will do everything within their power to feast from that tempting buffet. And, in a world saturated with anger, sadness, poverty and anxiety, a few crop-raiding elephants who are also struggling to survive leads to a dangerous, and escalating, situation. This recipe for disaster includes potential loss of life on either side, socio-economic implications, and ongoing environmental and conservation challenges.

Thankfully, there is a solution. There are incredible people and organisations out there doing everything they can to protect these animals, and study their behaviour to encourage their peaceful coexistence with people.

On Saturday, 8 August, we conducted a world-first for conservation: a virtual elephant collaring in Hoedspruit, South Africa. The world may be in lockdown but the work of wildlife conservationists still needs to go ahead. So, for the first time, we took the live action to locked-down wildlife lovers all over the world, who were able to watch an adrenalin-fuelled elephant collaring operation as it unfolded, from the safety and comfort of their homes.  Some 250 viewers from around the world logged in to watch this incredible experience.

As an NPO, Blue Sky Society Trust has been working with Elephants Alive since 2016. With COVID-19 hammering travel and tourism, Blue Sky founder, Carla Geyser, came up with the incredible concept to connect elephant lovers across the planet to the excitement of the on-the-ground operation. Anka Bedetti from Elephants Alive had a similar idea, so through collaborative efforts, the organisations turned the concept into reality.

Mobilising modern technology, they were able to live stream the collaring operation from the middle of the bushveld, raising critically needed funds and awareness in the process.

We first tracked down General, a powerful 35-year old bull with magnificent tusks. It was simply surreal being in his presence! And, Dr Michelle Henley founder of Elephants Alive told us General may be bigger yet as he grows older and could possibly become a big tusker.

General was tracked down in the Greater Kruger on the border of Thornybush and Timbervati. He was immobilised by the air crew led by wildlife vet, Dr Joel Alves, and behind the propeller of a little yellow Robinson 44 helicopter, was the talented Gerry MacDonald. I have never seen a pilot operate a helicopter with such skill! Negotiating trees, tracking the elephant and still while communicating with the ground crew, and then positioning the helicopter to make sure Joel gets a crack shot with the dart to bring to a halt the moving target.

Once the animal has been immobilised, it takes a good 5 to 8 minutes for him to go down. Then, there’s no time to waste! The ground crew from Elephants Alive must rush to him to make sure he has gone down correctly. If the elephant has fallen onto his haunches which is called sternum recumbency, the team needs to act fast and push the 5-6 ton animal on its side. Elephants are mainly nasal (trunk) breathers. Therefore, there is a risk of respiratory obstruction if the trunk becomes kinked during recumbency or whey they are down on their haunches as it puts much pressure on the lungs. A stick is used to keep the trunk open to make sure the breathing passage is clear and a team member is tasked to monitor the breathing – which is 5 to 6 breaths in a minute. If the elephant becomes stressed, the vet can quickly wake him up and he will walk away.

With General safe on his side on the ground, the crew from Elephants Alive jumped into action. They removed his old collar and replaced it with a new shiny one. DNA, tail hair and blood samples were taken, and General’s tusks, legs and feet were measured for research purposes. The collar will emit signals so the team can track his movements over the next four years.

Elephants Alive has been studying the elephants in the area for nearly 25 years. Their work spans three countries through which the elephants travel. Kruger National Park and the private reserves bordering the park in South Africa, Gonarezhou National Park in Zimbabwe, and Parque Nacional de Limpopo in Mozambique represent the core areas of movement.

Elephants Alive has collared 185 animals and can individually identify more than 2 000 elephants from their tusk and ear patterns by recording features like ear tears, notches and holes as well as tusk shape. This work has provided a unique insight into the social bonds, breeding behaviour and movements over time of these amazing animals.

Elephant collars provide critical scientific information, helping the organisation understand their movements in response to safety, sex, food and water.  The data also maps ‘fear-landscapes’ i.e. the areas elephants are avoiding.  This remote tracking detects if a collar stops moving, if it is too close to villages or if it is moving at unusual speeds – all of which could indicate a potential poaching event.  The collars provide real-time data so rangers or a response team can investigate.

The collars help mapping incredible journeys: between countries; between herds.

These movements also show how important safe corridors are between the reserves, and how protected areas need to incorporate a much wider landscape to do justice to the potential home range of an elephant.

This collaring operation raised R250 000, enough for two elephant collars. The live broadcast technology was provided by Painted Dog TV, whose team had to build a makeshift satellite dish to bounce the signal off the nearest tower which was between 45 and 57km away. It was not an easy task and at times we did lose signal.

Our second elephant, Proud, was collared in the afternoon, and after much negotiating by Gerry, he decided to go down in an area with little signal. So, sadly we weren’t able to broadcast Proud’s collaring but we managed to film some great footage of the day which will be shared with supporters in a few weeks (our editing genies need time to put it together). If you or someone you know would like to watch this, we are humbling requesting a small donation of R250 before sending you the private link. People who bought tickets and watched the virtual collaring, will be sent a video to remind them of the day they were part of a world first for elephant conservation!

A massive thank you also to Mike Kendrick and Vusi Mathe from Wild Shots outreach project for capturing these unforgettable world breaking moments on camera.

Our gratitude goes out to EVERY person who tuned in or donated or who shared our story on social media. There are so many role-players to thank. Overall, a fantastic team effort – and an important reminder that in these crazy times, we are more powerful when we work together!

Well, We are back home after 3 days at @mavela_gam

Thank you Erin Dickson for my @down2the_wire bra

An Impression Of One Of Carla's Journey's With Pur

Reach out, restore and recharge your soul with a V

Magic Exists - Lake Naverone. We just want to give

Any cookies that may not be particularly necessary for the website to function and is used specifically to collect user personal data via analytics, ads, other embedded contents are termed as non-necessary cookies. It is mandatory to procure user consent prior to running these cookies on your website.